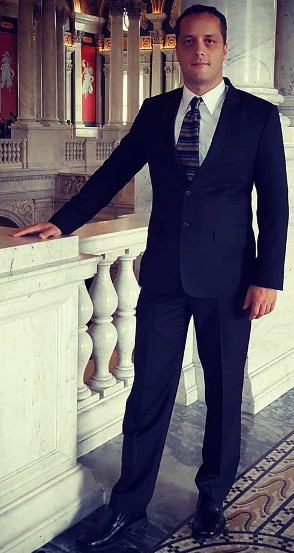 The Law Office of Cougle Law, LLC is managed by David J. Cougle, Attorney at Law.

Mr. Cougle graduated from Southeastern Louisiana University in 2003 with a B.S. in Computer Science.  He then spent 1 year as a C.A.S.A., providing volunteer representation for children in troubled homes.  Realizing that he could do more as a licensed attorney, Mr. Cougle decided to attend Southern University Law Center in Baton Rouge from August 2005 until his graduation in May of 2008.  Upon passage of the July 2008 Louisiana State Bar Examination, Mr. Cougle was sworn in as an attorney before the Louisiana Supreme Court and admitted to the Louisiana State Bar on October 23, 2008.

During the summer of 2007, Mr. Cougle traveled to the war-torn country of Lebanon and worked with a persecuted religious minority there.  It was this experience that led Mr. Cougle to realize the severe need of such organizations throughout the world for legal assistance.  Domestically, Mr. Cougle provides immigration services for clients seeking visas, immigration and asylum in the United States.

Mr. Cougle is conversational in Modern Standard written and spoken Arabic and is very familiar with Arab culture. He has spent over two years of his life living in the Middle East, having been to such countries as Lebanon, Egypt, Kuwait, Cyprus, U.A.E., Jordan, Bahrain, Morocco, Tunisia, Algeria and Oman.

He is a member of the American Immigration Lawyers Association, the Louisiana State Bar Association and the Slidell Bar Association.  In his free time, Mr. Cougle enjoys practicing the martial art of Aikijutsu.  He is a fourth degree black belt, or Yondan, in the Konwaryu Jujitsu Association and often acts as an instructor at the practices held at Southeastern Louisiana University.

Mr. Cougle is also a member of (ISC)² as a Certified Information Systems Security Professional®.